Dementia & The Diseases that Cause it

Dementia is an overall umbrella term covering a number of specific medical conditions and is caused by damage to brain cells. Communication links between these cells effect the normal thinking, behavior and feelings of a person living with dementia, resulting in the loss of memory, language, problem-solving and cognitive skills. These interfere with an individual’s daily life and progressively get worse. 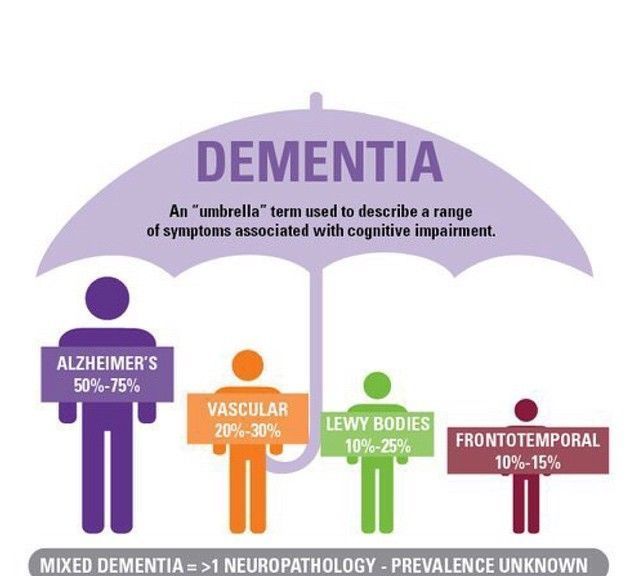 There are a number of Disease that cause dementia, the most common being explained below.

What is Alzheimer’s Disease? -

Alzheimer’s is the most common form of dementia, a general term for memory loss which interferes with daily life. Alzheimer’s disease accounts for 50-75% of dementia cases.

Alzheimer’s disease is a brain disorder named for German physician Alois Alzheimer who first encountered it in 1901 and later documented it in his medical literature. In 1910, Emil Kraepelin, a psychiatrist noted for his work in naming and classifying brain disorders, proposed that the disease be named after Alzheimer.

Alzheimer’s is a progressive and fatal brain disease which destroys brain cells, causing memory loss and problems with thinking and behavior. These symptoms affect an individual’s work, hobbies and social life. The disease gets worse over time and it is ultimately fatal. Today it is the sixth-leading cause of death in the United States and there are over 50 millions people living with Alzheimer’s worldwide. This number will almost double every 20 years, reaching 82 million in 2030 and 152 million in 2050. The typical life span of someone living with Alzheimer’s is 8-10 years after diagnosis.

Alzheimer’s disease has no current cure but there are treatments for symptoms which combined with supportive services can lead to a good quality of life for those living with Alzheimer’s.

Two abnormal structures called plaques and tangles are prime suspects in damaging and killing nerve cells. Plaques build up between nerve cells. They contain deposits of a protein fragment called beta-amyloid (BAY-tuh AM-uh-loyd). Tangles are twisted fibers of another protein called tau (rhymes with “wow”). Tangles form inside dying cells. Though most people develop some plaques and tangles as they age, those with Alzheimer’s tend to develop far more. The plaques and tangles tend to form in a predictable pattern, beginning in areas important in learning and memory and then spreading to other regions [such as language and mobility]. Scientists are not absolutely sure what role plaques and tangles play in Alzheimer’s disease. Most experts believe they somehow block communication among nerve cells and disrupt activities that cells need to survive.

What is Vascular Dementia? -

What is dementia with Lewy bodies? -

Taking its name from the abnormal collection of protein, known as Lewy bodies, which occur in the nerve cells of the brain. ...read more

A rare cause of dementia, which typically develops at an earlier age than Alzheimer’s, sometimes referred to as Pick’s disease. ...read more

The term younger-onset refers to Alzheimer’s that occurs in a person under age 65. Younger-onset individuals may be employed or have children still living at home. Issues facing families include ensuring financial security, obtaining benefits and helping children cope with the disease. People who have younger-onset dementia may be in any stage of dementia – early, middle or late. Experts estimate that some 500,000 people in their 30s, 40s and 50s have Alzheimer’s disease or a related dementia.

Mixed Dementia
A condition in which the brain changes of more than one cause of dementia occur simultaneously, for example the abnormal protein deposits associated with Alzheimer’s disease coexist with blood vessel problems linked to vascular dementia.

Everyone is a little bit forgetful now and again, but when memory loss for you or a loved one starts to interfere with your daily life it is crucial that you get it checked out in case it is a symptom of Alzheimer’s disease. Individuals may experience the following signs at different levels but if you notice any of these it is recommended that you see you doctor as soon as possible to voice your concerns. They will arrange for further investigation which may include a CT Scan, MRI or appointment with the neurologist. The sooner a person is diagnosed the sooner they can start receiving treatment that will help slow down the progression of the disease.

This is the most common sign of the disease and can include the following:

(2) Difficulty with problem solving or planning

Some people may experience changes in their ability to develop and follow a plan or work with numbers. They may have trouble following a familiar recipe or keeping track of monthly bills. They may have difficulty concentrating and take much longer to do things than they did before.

People with Alzheimer’s often find it hard to complete daily tasks. Sometimes, people may have trouble driving to a familiar location, managing a budget at work or remembering the rules of a favorite game.

People with Alzheimer’s can lose track of dates, seasons and the passage of time. They may have trouble understanding something if it is not happening immediately. Sometimes they may forget where they are or how they got there.

For some people, having vision problems is a sign of Alzheimer’s. They may have difficulty reading, judging distance and determining color or contrast. In terms of perception, they may pass a mirror and think someone else is in the room.

(6) Difficulty with Reading or writing

People with Alzheimer’s may have trouble following or joining a conversation. They may stop in the middle of a conversation and have no idea how to continue or they may repeat themselves. They may struggle with vocabulary, have problems finding the right word or call things by the wrong name (e.g., calling a “watch” a “hand-clock”).

A person with Alzheimer’s disease may put things in unusual places. They may lose things and be unable to go back over their steps to find them again. Sometimes, they may accuse others of stealing. This may occur more frequently over time.

People with Alzheimer’s may experience changes in judgment or decision-making. For example, they may use poor judgment when dealing with money, handing over large amounts to schemes etc. They may pay less attention to grooming, dressing or keeping themselves clean.

A person with Alzheimer’s may start to remove themselves from hobbies, social activities, work projects or sports. They may have trouble remembering how to complete a favorite hobby. They may become withdrawn and avoid being social because of the changes they have experienced. Visitors may become unwelcome.

The mood and personalities of people with Alzheimer’s can change. They can become confused, suspicious, depressed, fearful or anxious. They may be easily upset at home, at work, with friends or in places where they are out of their comfort zone.

Early or mild-stage is the early part of the disease when problems with memory, thinking and concentration may begin to appear in a doctor’s interview or medical tests. Individuals in this stage typically need minimal assistance with simple daily routines. At the time of a diagnosis, an individual is not necessarily in the early stage of the disease; he or she may have already progressed beyond the early stage.

Middle or moderate stage can typically last for many years. As this stage progresses symptoms become more pronounced, leading to greater levels of care required to assist the person with dementia as damage to nerve cells in the brain make it harder to express themselves and continue with their daily routine.  Confusion with words, acting in unexpected ways and feelings of frustration and anger associated with lack of independence and inability to communicate are often experienced.  During this moderate stage it is important to maintain meaningful activities which can be simplified for the person living with dementia and help them to continue to express themselves, have a routine and be physical activity.

As dementia symptoms become more severe individuals lose their ability to respond to their environment, to communicate and to control movement. Extensive care is required and personality changes may take place.  Persons living with dementia in this advance stage do benefit from interaction - particularly gentle touch, reassurances and listening to relaxing music. Support services and hospice care can benefit people in the final stages of dementia, their families and caregivers to provide comfort and dignity at the end of life.